The outstanding Te Awamutu College student for 2020 is Oksana Voznyuk — taking away three of the major awards, including the General Excellence Cup and AG Freeman medal for Dux Litterarum. Oksana was first in subject in drama, English extension and earth and space science. She also takes calculus and art — painting, and has already attained NCEA Level 3, gaining all 89 credits she has attempted so far this year, all at excellence level.

During senior prizegiving on Thursday she was also presented with the Senior English Essay Cup, The Owen Joyce Cup for Contribution to Music, The Emma Award for the Arts for outstanding achievement, contribution and leadership in drama and the University of Auckland Top Achiever Scholarship valued at $20,000.

As part of the student leadership team, Oksana was congratulated for her part in leading students of Te Awamutu College through a difficult year.

She was an integral part of a great team, helping plan and run assemblies and she was the driving force for the successful Anzac Day online message.

She was also a fine ambassador for the school at Te Awamutu Intermediate and on open days.

Oksana was further recognised by being presented with the RSA Peace Scholarship for contribution, service and leadership, and the General Excellence Cup, for academic, sports, culture, participation and service.

Her participation, service and leadership in her time at the College has been extensive right from 2016 as a Year 9 student. She immediately became involved with the SADD Committee, Support Act, Senior Band and school production.

An accomplished flautist, Oksana has been with Senior Band for five years.

Her contribution to school committees has been outstanding — five years in SADD, three years in Health, two years in Diversity and two years in Culture. Oksana was chair of the Culture Committee this year and under her capable leadership they planned and prepared for the annual Talent Quest.

She has been a caring and committed Keep Cool Mentor for 2019 and 2020 — working with Year 9 mentees.

“She has been a great role model and given great service and leadership to the College,” he said.

Oksana’s achievements are more notable because of her other commitments outside school.

She held a part-time job with the Kidzone childcare programme, working before and after school and during school holidays, and is a private piano tutor.

Oksana is attending Auckland University from next year to undertake a bachelor of Advanced Science for Psychology to eventually become a clinical psychologist.

She says she has been interested in people’s behaviours and how the mind works for a number of years.

“Being a Keep Cool mentor has helped my understanding of what it will be like to work with and help people,” she says.

She also hopes to become highly involved in university life.

“I was to continue playing flute with a symphonic band and keep up my love of drama,” she says.

There is no doubt this highly motivated young woman will achieve all her many goals. 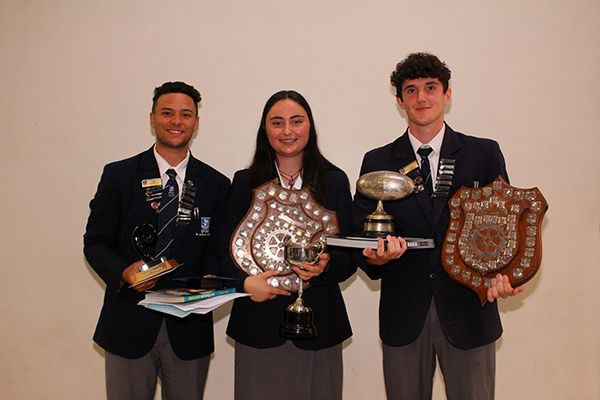 Matthew topped Level 2 economics and challenged for Year 12 Dux. He has all 53 Level 2 credits he has attempted to date, all at Excellence level. Matthew has been a member of the Hockey 1st XI for four years and this year was a valuable member of the Health and Service Committees and is part of the Camp Committee planning the 2021 Year 13 camp. He also devoted time and effort to being a Keep Cool mentor in 2020.

Bree was chair of the SADD (Students Against Dangerous Driving) Committee, which effectively promoted, organised and ran a range of events to bring alive the messages around driver fatigue, driver distraction and the effects of alcohol and drugs on driving. She has chaired meetings, attended workshops and connected with the national SADD organisation. Bree was also a valuable member of Te Awamutu College Ball, Culture, Diversity, Health and Service Committees.

Billie was chair of the Service Committee which selected two humanitarian/charitable causes for Mufti Days in 2020; Te Awamutu Branch of Riding for the Disabled and Women’s Refuge, raising worthwhile funds and awareness.

Craig has combined his Year 12 workload, playing rugby in our First XV and undertaking community service with the commitment of successfully completing a Gateway programme. He undertook his Gateway placement with Magills Butchery, completing work experience one day a week and in his own time passing an additional 20 industry related Unit Standard credits through Skills 4 Work.

Nikyla has been extensively involved in College life for five years. In Year 9 she was in Support Act, a member of College netball and volleyball teams and participated in zone and regional athletics. She continued volleyball and netball for the next four years, and was in the top teams from Year 11, and continued athletics at a high level. Last year she captained a team at NZSS Beach Volleyball and was an U19 WSS volleyball representative.

Nikyla was a member of the committee which planned and ran the 2020 Year 13 Camp and this year was on the Ball, Service and Sport Committees and was a Gorst House leader.

Rotary Shield for Service to the School: Troy James.

A 2020 head student, Troy has given a huge commitment to rugby since his arrival, from U15 through to 1st XV for the last three years. His leadership qualities were recognised — captain of U15, co-captain of 1st XV last year and captain this year. He also competed in athletics to a high level and last year also played lacrosse and volleyball. As a head student he led by example.

Rotary Shield for Service to the School: Kate Yarndley.

A fellow head student, Kate proved a great organiser and was to the forefront planning and running assemblies, participated in the production of a Youth Awards online presentation, has spoken well at Te Awamutu Intermediate and been a friendly ‘tour guide’ on Open Days as part of Te Awamutu College’s enrolment programme.

She has played for the Girls Hockey 1st XI for five years, and was captain this year, as well as playing for the Boys 1st XI. Kate helps Special Olympics Swimming and was a member of the Ball, Culture, Health and Service Committees. Kate cares about others and has a strong set of values.

A third head student, MJ has displayed a range of talents and interests and has been involved in an array of extra-curricular activities, including volleyball, rugby, Stage Challenge, school production, Dancing with the Staff and ShowQuest. He has played volleyball and rugby for five years and last year was elected by his peers as Board of Trustees Student Representative where he was interested and helpful in BoT discussions. MJ has proved a great role model and ambassador for the school.

Gemma was top of subject in all her classes - accounting, economics, food technology, mathematics with calculus and media studies.