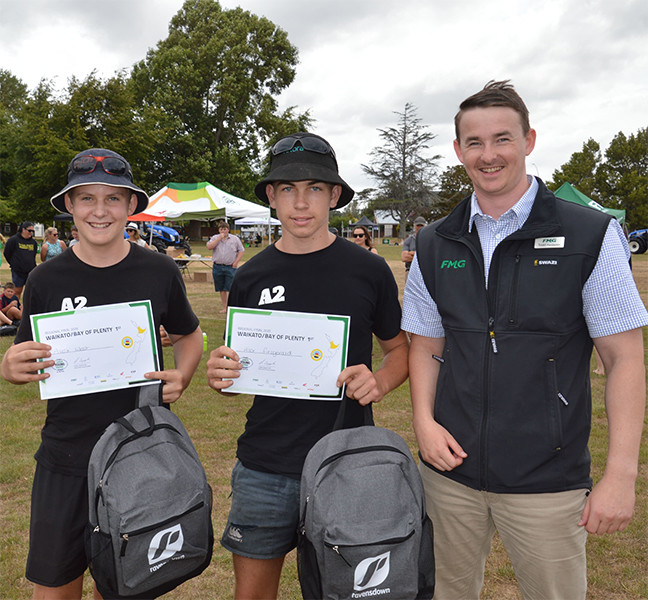 A duo from Te Awamutu College are on the road to the FMG Junior Young Farmer Grand Final after taking the out Waikato Bay of Plenty FMG Junior Young Farmer of the Year title over the weekend.
It was the second time Alex Fitzgerald, 15, and Alex West, 14, - team name A2 after the milk - had competed in the agricultural competition.
"We did it last year and came second and so this year we thought we'd give it another crack," said Alex W.
"We thought why not try for first," Alex F said.
They went onto the grand final last year hosted in Napier, and came 12th overall. Alex F also received FMG Junior Young Farmer Competitor of the Year.
This year's regional competition ran at St Paul's Collegiate School in Hamilton alongside the Waikato Bay of Plenty FMG Young Farmer of the Year competition which is the contest for those over 16.
Teams battled it out in a series of modules which included naming parts of a tractor, building a chainsaw and selecting the appropriate safety gear, naming hazards and what insurance could be claimed, a memory game naming farming techniques and products and identifying soil based on its texture.
Points were tallied and the top five teams went on to a buzzer quiz where A2 managed to get ahead and take the overall win.
"We were quite surprised with our win because we went up against some schools that are really good at their agri-sciences," said Alex W.
They each took home a range of prizes including a Ravensdown bag, a $100 Farmlands voucher from Lincoln University, $50 in cash from Massey University, drink bottles, coffee cups, a singlet and socks from New Holland and a certificate and medal.
They also received a $250 Worksafe voucher for their school that will be presented during assembly.
The two Year 11 students have grown up farming.
Alex W helps his parents on dairy farms but one day hopes to get into sheep and beef farming, get his cadetship, farm overseas and then eventually own his own farm.
Alex F grew up on his parent's dairy farm which was sold three years ago. Now he spends most his time helping at his grandparent's sheep and beef farm in Wharepuhunga or working on his uncle's dairy farm.
He also hopes to have his own sheep and beef farm one day and wants to contract drive tractors during summers.
"I just love getting out on the farms, shifting stock and getting to drive the tractors. Every day is different so I'm always learning a bit of all sorts," he said.
With the win the boys are now preparing for the FMG Junior Young Farmer Grand Final which is to be hosted in Christchurch in July.
"We've got a lot of work ahead of us. We need to get sponsorship to get us down to Christchurch and we have lots of study to do so that we can up our placing from last
year," said Alex W.
The boys plan to set up a Facebook page so that their sponsors will be able to follow their journey to the grand final and they also plan to put company logos that sponsor them on their competition clothing.
The grand final takes place from July 2-4 and the venue is yet to be confirmed.