The development and operation of enrolment schemes is undertaken under authority granted under Schedule 20 of the Education and Training Act 2020, which describes the basis on which the Secretary’s powers in relation to enrolment schemes will be exercised. 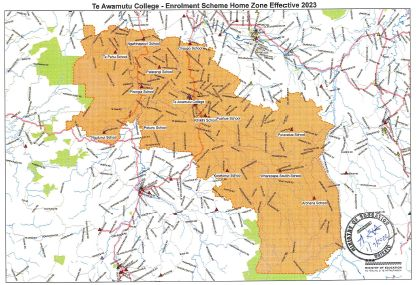 All students who live within the home zone described below shall be eligible to enrol at the school. Click on map to view the larger PDF version.

Note: Both sides of all streets and roads included in the above description are included unless otherwise stated.

Proof of residence within the home zone will be required.

Each year, applications for enrolment in the following year from in-zone students will be sought by a date which will be published in a daily or community newspaper circulating in the area served by the school. This will enable the board to assess the number of places which can be made available to students who live outside the home zone.

Out of Zone Enrolments

Each year the board will determine the number of places which are likely to be available in the following year for the enrolment of students who live outside the home zone. The board will publish this information by notice in a daily or community newspaper circulating in the area served by the school. The notice will indicate how applications are to be made and will specify a date by which all applications must be received.

Applications for enrolment will be processed in the following order of priority:

If there are more applicants in the second, third, fourth, fifth or sixth priority groups than there are places available, Selection within the priority group will be by ballot conducted in accordance with instructions by the Secretary, under Schedule 20, Clause 3 (1) of the Education and Training Act 2020. Parents will be informed of the date of any ballot by public notice in a medium appropriate to the area served by the school.

Applicants seeking second or third priority status may be required to give proof of a sibling relationship.