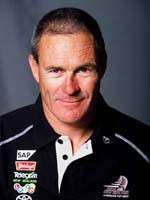 Joey Allen is a sailing legend, a technical sailing coach and video analyst for Emirates Team New Zealand with a long history of performing at the top level. He has raced 18ft skiffs, and crewed in match and fleet racing all over the world. Allen was with Team New Zealand in 1995 when they won the America’s Cup in San Diego and again for the defense in Auckland in 2000. Joey Allen coached the team in 2003 and again in 2009.