A Te Awamutu College student has cooked her way into the National Secondary Schools Culinary Competition grand final.
Ilisa Folau, 16, was crowned the regional winner for the Waikato competition after she impressed judges with her dukkah-crusted carrot falafel dish.
The entree featured carrot puree, pickled car- rot, smoked feta and tahini sauce.
The competition took place at the Waikato Culinary Fare hosted by Wintec and aims to celebrate and inspire upcoming chefs.
The judges’ comments included praise for Ilisa’s skill, beautiful presentation and flavoursome combinations.
Students competing had to prepare, cook and plate two individual portions of an entree course within 60 minutes. Fresh carrots were a main component of the dish.
From here Ilisa will collaborate with a fellow school student to form a team of two.
Together they will compete against eight other schools in the national grand final in Auckland on September 3.
Ilisa said she was surprised and delighted to receive the award and only entered after being encouraged by Te Awamutu College hospitality teacher Maree Letford.
Maree says Ilisa has a gift for working with food.
“She’s got a lovely, respectful manner with handling food. It’s like watching ballet in the kitchen.”
Waikato Culinary Fare Trust co-organiser and Wintec hospitality manager Peter Radojkovich says the
unsung heroes are food technology teachers.
“Hats off to our food tech teachers — they do an amazing job of coaching, supporting and giving their students the confidence to cook well in a live competition,” he says.
“It’s our teachers who are guiding their students to develop their talent and be successful.”
Peter says the quality of entries was really high.
“We saw cakes that looked and tasted like they came from top patisseries and pizzas, burgers and mains that would draw high praise on a restaurant or cafe ́ menu. You would not have thought they were made by intermediate and secondary school students.” 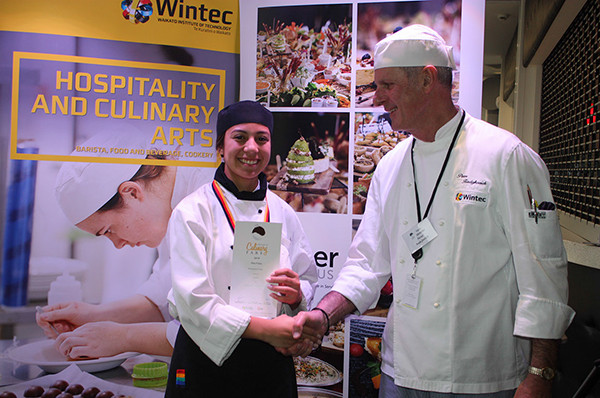