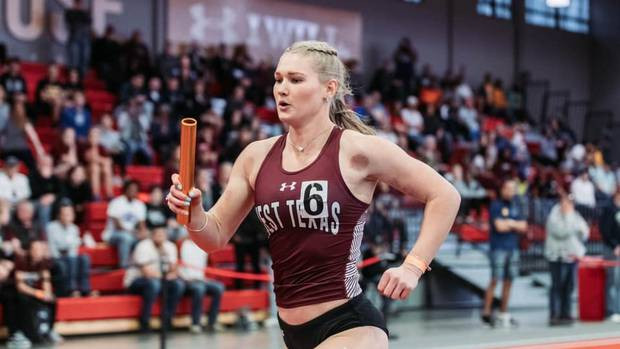 West Texas A&M is a Division 2 University in Canyon, near Amarillo in North West Texas.

Belfield, 19, was educated at Arohena Primary School, Te Awamutu Intermediate and Te Awamutu College.
She arrived in America during August, near the end of their summer, and was greeted by 30+ degrees days.

Track and field doesn't happen at that time of year as autumn is their cross country season but training got underway almost immediately to build for their indoor season.
West Texas doesn't have an indoor track which meant when winter arrived training sometimes took place in the snow.

Mid-December brought the first meet of the season with Leah travelling to Pittsburg, Kansas and she wasted no time proving her credentials.

She placed second in the 60m with a personal best of 7.60 seconds, and second as part of her teams 4x400m relay.

Those efforts as a freshman earned her the title of Women's Track Athlete of the Week. 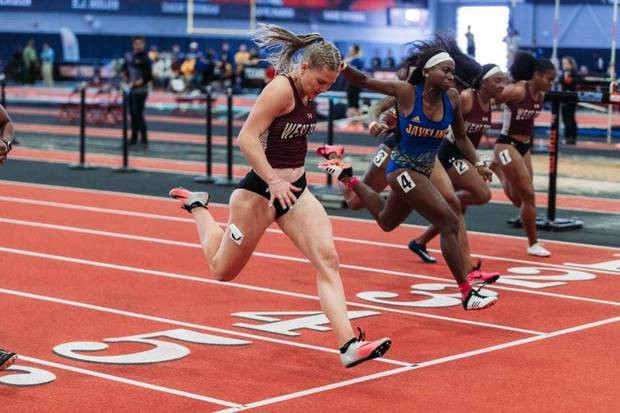 West Texas A&M is part of the Lone Star Conference consisting of 16 Universities from Texas and neighbouring states.

Leah then had to wait a month for her next outing in mid-January, this time in nearby Lubbock, up against mostly Division 1 universities.

A slow start cost her in the 60m where she ran 7.68 seconds for 17th best time and then placed seventh in the relay.

The following week they were interstate again in Alamosa, Colorado. Belfield ran 7.60 seconds in both her heat and final, winning both and again being awarded Athlete of the Week.

February was a busy month with a trip to Albuquerque, New Mexico.

Leah got her first taste of running 200m indoors, one circuit of the track. The tightness of the turns caught her by surprise but that didn't stop her running a sharp 24.89 seconds for ninth place. It was another meet with the Division 1 schools and so she was the highest placed athlete from her conference (across all women's track events) and for the third time in four meets, she was named Athlete of the Week.

The next week they were back in Albuquerque and again with Division 1 schools.
There were over 100 women in the 200m and Leah finished 24th and gained a new personal best of 24.55 seconds. Their 4x400 relay team placed 14th.

Both of these times ranked inside the Top 20 for all Division 2 schools across the whole of America.

After a two-week break it was into the business end of the indoor season with the Lone Star Championships.

Leah entered the Champs ranked number one in both the 60m and 200m. She won both her heats and entered both finals with the second fastest times 7.62 seconds and 24.49 seconds.

These were faster than she had ever run outdoors back home. Most outdoor events are run faster because of the more sweeping bends.

Despite the season being cut short with Covid-19, things still ended on a high note for Leah.

Her times placed her on the schools' Top 10 all-time list, and she ended up ranked 22nd nationally in both events.

To cap things off she was named Lone Star Conference Women's Track Athlete of the Year. This was the first time that West Texas had won that award.

Leah is also doing fine academically in her study of Sports and Exercise Science and has been scoring high grades, leading to a Dean's Award for achievement.

Her first year finishes in late May and she was due to return home for a few months but with Covid-19 effecting flights and movement, things are now up in the air.

Her sister Mackenzie was due to visit recently but the flight got cancelled the day New Zealand closed its borders.

Leah's former coach Murray Green was also due to leave in late April to see her compete outdoors but that too has been cancelled.