Change is on its way for Te Awamutu College’s house names, which have been in place for at least 85 years. One of the houses is named after General Sir Duncan Alexander Cameron who led colonial forces through battles and attacks in the early 1860s that killed many Maori throughout the Waikato and Waipa areas.

Governor George Grey connected the region to the roots of the issues he had with Maori as it was home to the Kingitanga, the Maori King Movement, which was firm on not selling their land.

The darkest days for Maori in the Waikato included the attack at Rangiaowhia and the battle of Orakau, near Te Awamutu.

Late on Saturday, February 20, 1864, Cameron and more than 1200 British troops moved past Paterangi without alerting lookout stations and suddenly appeared before the village of Rangiaowhia the next morning to attack.

The village’s men were away, prepared for a battle they believed was taking place near Paterangi, leaving the village and its occupants — women, children, the sick and the elderly defenceless.

Many were killed by gunfire and by fires being lit in whares and the church.

The colonial forces occupied the village and land, taking any resources that they could get their hands on.

At the battle of Orakau, Maori defenders were outnumbered by at least 1000.

After a number of exchanges and advances, the Maori’s food, water and ammunition started to run out and they retreated by leaving the pa in a disciplined body and breaking through the surrounding cordon.

It was during this retreat that it is believed that most of the Maori casualties occurred with at least 160 being killed, including the stabbing of women as they lay wounded.

“It is most timely to rename the houses at Te Awamutu College and shed the colonial story that has taken precedence in this town for some time,” says Te Wananga o Aotearoa Tikanga Maori and Te Reo Maori adviser Paraone Gloyne.

“There are much better examples of leadership we can draw from that have more of a connection to us as Maori, and as a community, than houses named after people like Cameron, Gorst and Selwyn — all agents of colonisation.” 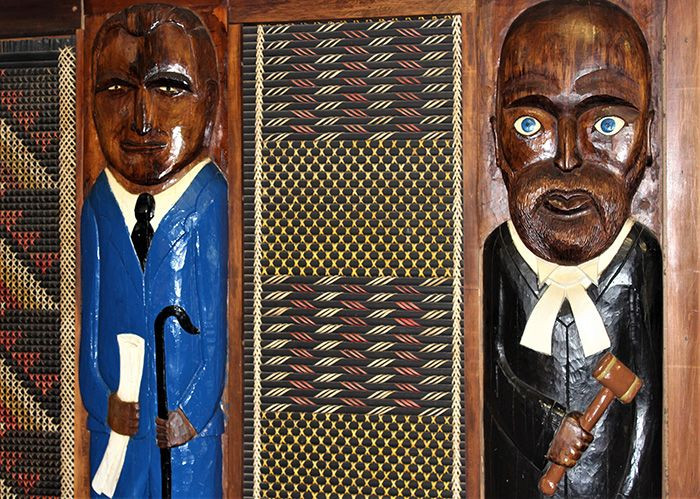 The school houses are Cameron (red), Selwyn (yellow) — named after Bishop George Augustus Selwyn who was the first Anglican Bishop of Diocese of New Zealand and was charged with misleading Rangiaowhia’s occupants to believe the village was safe and it was also claimed he blessed the troops involved in the massacre, Gorst (blue) named after Sir George Gorst who taught at a Maori boys’ school in Hopuhopu, became an inspector of mission schools in the Waikato and later became resident magistrate in an attempt to bring Waikato tribes under British law, and Melrose (green) named after George Baines Melrose — who was the first chairman of the district high school committee.

“People of the community need to know that the board of trustees and senior leadership are in agreement — it’s time for a change. And the thought was, if we’re going to get rid of one, possibly two then let’s get rid of the four,” says Te Awamutu College principal Tony Membery.

Tony says over various years two letters — one from a church group and the other from a Maori community member, had been sent to the board of trustees about the names.

He had also received three submissions from Maori teachers and on some occasions some students and teachers have requested not to be in Cameron House.

So far, Tony has received 25 name suggestions from students and staff.

He is also inviting parents and members of the community to have their say and asks that suggestions and feedback be made to him by Friday, May 21.

Some of the suggestions include names of local streams, rivers, lakes and mountains, names of gods of natural elements, names of native New Zealand trees, plants or animals, names of famous New Zealanders and names of Te Awamutu College Hall of Fame members.

“We want house names that the whole school community can identify with, understand, pronounce correctly and possibly be associated with a colour that can be depicted and worn,” says Tony.

The new school house names will come into effect next year.

In the school marae, O-Tawhao, there are carvings of the four men that the houses are named after.

Tony has indicated that these carvings will remain and that the House Honours Boards in the school hall that displays previous winners of house competitions will be unchanged.

Once Tony has received all submissions, he will work with respected Maori who are associated with the school to refine the list to four ideas.

These ideas will then be sent out to students and teachers to vote on.

Emails need to be sent to [email protected] by Friday, May 21 if community members would like to give feedback or submit an idea they have for the new school house names.